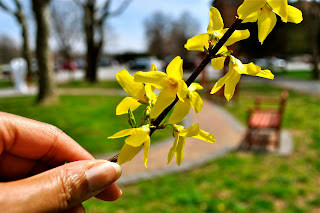 Notice anything different? Yep, I gave my blog a facelift. I don't know about you, but as a woman who thrives on creativity I get bored with the same 'ol same 'ol. I wanted to give my blog a new look to kick off the spring and summer. A template with lighter, brighter colors, a departure from the darker hues of fall and winter — and a new photo — this time without holding my camera. (Even thinking about changing the name of my blog.) So here it is.
Let me know what you think. But please be kind. :-)
Hopefully, I'll post a new article soon. Not sure what to write about next. May the Lord inspire me this holiday weekend. 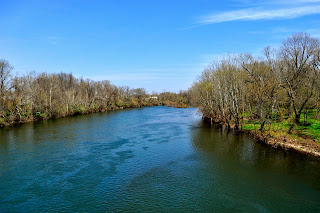 I have a slew of photos I took of cows, llamas, donkeys, and turkeys at a nearby farm I visited recently that I want to put on my photo blog. Just don't know how to package it yet. The photo above was taken the day I took the farm pictures. Yeah, that's me holding a branch of yellow forsythias.
The picture to the right also was taken that day. I stood on a bridge to get that shot as cars and trucks whizzed by going 40 mph. A little scary — and risky to say the least. But I had to get that shot. Only a seasoned, diehard photographer could understand. Not that I'm a seasoned photographer, but I aspire to be.
Well, if I don't get to speak with any of you in the next couple of days, please have a wonderful Memorial Day weekend with your family and friends, and write about it so I can get inspired.

Email ThisBlogThis!Share to TwitterShare to FacebookShare to Pinterest
Labels: Musings 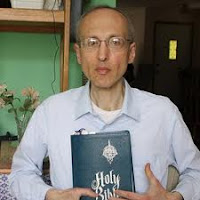 When the clock struck 6:01 pm this past Saturday, May 21, 2011, many Christians and non-Christians alike breathed a sigh of relief. The church wasn’t raptured, and a massive earthquake didn’t occur.
Most of the day Saturday I joked around about Harold Camping’s false prophecy with my mom, my hairstylist, and a fellow patron while getting our hair done at a neighborhood beauty salon.
“I’m getting my hair done for Jesus,” I quipped.
“I want to have all of my errands done before 6 pm,” a woman giggled, “so I’ll be ready.”
Don Lemon, a CNN news anchor, even joked a bit. “Well, it’s 5:52 pm, 8 minutes before the world is supposed to come to an end. I’ll hang around for a couple of seconds after 6 to see if we’re still here.” When it was 6 pm, Lemon said, “Well, looks like we’re still here. Now let’s go to The Situation Room with Wolf Blitzer.” My son and I chuckled as I turned off the television.
Not so Funny
While some poked fun of the doomsday prediction, because they simply didn’t believe it, at least one of Camping’s followers didn’t think it was so funny. In a news segment on ABC World News Weekend Edition filmed in Times Square New York City, Good Morning America anchor Ron Claiborne interviewed Robert Fitzpatrick, a Camping follower and retiree who allegedly spent a sizeable chunk of his $140,000 life savings on poster advertisements in the New York City subways. Claiborne reported that Fitzpatrick was clearly shaken, shocked, and saddened when nothing happened at 6 pm.
Interrogation Time
News reporters, cameramen, photographers, and irate New Yorkers surrounded Fitzpatrick in Times Square and peppered him with questions. “We’re still here! We’re still here!” exclaimed an onlooker. “Why didn’t the earthquake happen?” “Why are we still here?” demanded a man in the crowd. Fitzpatrick tried to explain from the bible how Camping arrived at his doomsday prediction. “That’s God Word,” shouted another man. “You shouldn’t play around with God’s Word.” “I want my money back,” demanded a woman. “Are those people who spent money on buses to travel around going to get their money back?” “Are they going to get their money back?”
My burning question is: What does Camping have to say about all of this? One news report said Camping was in seclusion in Oakland, Calif., and couldn’t be reached for comment.
Can Anything Good Come From This?
The travesty behind this false prophecy is that many of Camping’s followers spent their hard earned money, left their jobs, left their families, and wasted time traveling the country to spread the news that the world was going to end on May 21, 2011. The false prediction made people nervous at the very least and almost caused a panic. The good news is that this false prediction got people talking about the bible, the gospel, who Jesus is, the fact you must be saved to go to Heaven, and that there will come a time when God’s judgment will come upon the earth. So if it takes an event such as this, even a duplicitous one, to spread the gospel and encourage people to begin thinking about their salvation and spiritual lives, it can’t be all that bad (Philippians 1:18).


** This post is linked to Spiritual Sundays here.
Posted by Judy at 8:50 PM 9 comments 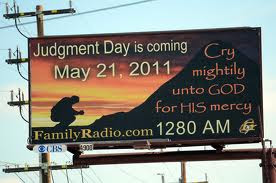 "No one knows about that day or hour, not even the angels in heaven, nor the Son, but only the Father. Be on guard! Be alert! You do not know when that time will come." (Mark 13:32-33)
By now, you've probably seen newscasts, YouTube videos, Tweets, Facebook chatter, and billboards, declaring the message that Christ is going to return tomorrow, Saturday, May 21, 2011. You've probably heard that there's going to be a tremendous earthquake that will kill millions of people, and that the church is going to be raptured, and escape God's wrath; and five months later on October 21, 2011, God is going to completely destroy the earth and the universe.
Well according to the Bible, these proclamations are simply not true. No one knows the day or the hour when the Lord will come back to this earth to take those who believe in Him to Heaven. There are signs of His imminent return (i.e., war in the Middle East, false prophets, earthquakes, tornados, tsunamis, hurricanes, etc.), but we cannot know the actual day — no matter how clever our mathematical calculations.
This false prophecy came from Harold Camping, a Christian radio broadcaster and president of Family Radio, a California-based broadcasting network. Mr. Camping has been known to use so-called Bible-based numerology to predict dates for the end of the world. He miscalculated that Christ would return September 1994. When he realized he was wrong, he recalculated and came up with a new date: May 21, 2011.
The mention of Christ returning May 21, 2011, has caused quite a stir.
Many of Mr. Camping's followers have left their jobs and families to stand on street corners and travel from town to town and state to state to tell people the news. I know they mean well, because Jesus said we should share the gospel and warn people of the coming judgment of God, because unless a person is born again, he or she will not enter the Kingdom of heaven.
Just as earthquakes, wars, and rumors of wars are signs of the end times and of Christ's return, so are false prophets spreading false information. "... many false prophets will appear and deceive many people" (Matthew 24:11). So let us be informed — not deceived.
Everything we need to know about the truth of Christ's return is in our bibles. All we have to do is open it up and read it. Yes, Christ will return, and God's judgment will take place, but only according to His timing, not ours. "Jesus said to them [his disciples]: It is not for you to know the times or dates the Father has set by his own authority" (Acts 1:7).

** This post is linked to Spiritual Sundays here.
Posted by Judy at 1:05 PM 21 comments 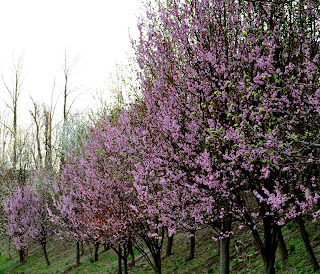 “I keep asking that the God of our Lord Jesus Christ, the glorious Father, may give you the Spirit of wisdom and revelation, so that you may know him better. I pray also that the eyes of your heart may be enlightened in order that you may know the hope to which he has called you, the riches of his glorious inheritance in the saints, and his incomparably great power for us who believe. That power is like the working of his mighty strength.” (Ephesians 1:17-19)
Three weeks have whizzed by since we celebrated the resurrection of our Lord Jesus Christ. And while some of us may have moved on with our lives and placed the significance of that day behind us, it’s important to reflect on the impact and the difference the resurrection should make in our daily lives.
Because of the resurrection of Jesus, we can have intimate fellowship with our Heavenly Father and get to know Him better. And we need the Spirit of Wisdom and revelation to accomplish this.
God wants us to get to know Him better and experience His resurrection power in every aspect of our lives — His incomparably great power for us who believe. Just the idea of being able to experience God’s power in every facet of my life gives me goose bumps. Hope. And great joy.
My Pastor said we can miss God’s power if we’re not in tune with Him, which is why we must have the Spirit of wisdom and revelation to discern when His power is at work.
However, my Pastor did say that even though we believe in God’s power, that doesn’t mean that everything is always going work out exactly the way we want it to. That grabbed my attention, especially since I’ve been praying and praying and praying for a successful career move for more than a year and not much, if any, fruit has resulted. “Why isn’t God answering my prayers?” I complain. “Is He not listening? Am I doing something wrong? Is God mad at me? How long, O Lord?”
My Pastor reassured that God’s power is at work in our lives even though we don’t see it. “Whew! That’s a relief,” I thought. For a while, I’ve been wrestling with the horrible, unwarranted thought that God has abandoned me. I know He promises to never leave me nor forsake me, but lately I’ve just been feeling distant from God — as though I’ve entered a dry spell. My faith had been wavering back and forth.
“God’s incomparably great power is available today, right now for those who believe,” my Pastor asserted. I do believe. I believe in the death, burial, and resurrection of Jesus Christ, and I want to experience His great power in my life every day. I’ve experienced it plenty of times before, so why not now?
Shameful question.
I know God has blessed me immensely and continues to do so. I have a great husband, son, and family, wonderful friends, and all of my needs are met — and then some. So yes, God’s mighty power is at work in my life indeed. Because Jesus is alive, I have great hope; you have great hope; and our world has great hope.
May we ask the Lord to give us His Spirit of wisdom and revelation to get to know Him better. May we come to know the hope to which He has called us, and experience His incomparably great power as we daily believe and put our trust in Him.

* This post is linked to Spiritual Sundays here.
Posted by Judy at 11:22 PM 5 comments