"You will eat the fruit of your labor; blessings and prosperity will be yours." (Psalm 128:2) "Give her the reward she has earned, and let her works bring her praise at the city gate." (Proverbs 31:31)
This past week the vice president of my company gave me four all-expense paid tickets to go see the Phillies play the Atlanta Braves at Citizens Bank Park on Friday, September 26th. Before she told me about the tickets, she asked me whether my husband and I liked baseball. I said "No," but I'm sure glad my answer didn't stop her from telling me about the special tickets and persuading me to go to the game.

She said the tickets were for Dugout Diamond seating—better than VIP. She said we'd literally be sitting right behind the batter's box (right). We'd enjoy free parking in a special lot for Dugout Diamond fans; we'd have access to free food all night long, first in a special restaurant, and then we'd be waited on hand and foot throughout the entire game with free beverages and snacks. She said it would be a really great experience. She and the president gave me these tickets because of the stellar October issue of Today's Dietitian, which is about to mail next week—our largest and most profitable issue of the year. I was so thankful. The president said the October issue was the best she's seen in terms of content and artwork. I was like "Wow!" I didn't realize it was that good. I simply worked hard on the issue as I always do on all the issues. But I must give all the glory to God! 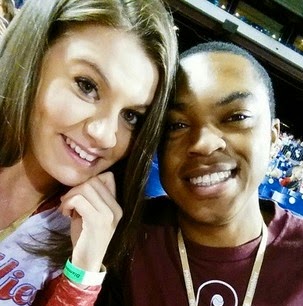 Of course, my husband accompanied me (above), and I invited my son and his girlfriend (left). I left work early and headed to Philly. We got to the stadium around 5:45 pm due to the traffic. But once we found the special parking lot and parked the car, we headed straight for the special restaurant because we all were hungry. This particular restaurant had different food stations where we could order our food, which was heated up/made right in front of us. There were stations for cheese steaks and hamburgers, salad, sandwiches, pasta, seafood, and ribs. My son had a huge Philly cheese steak and salad; his girlfriend had crab cakes and asparagus and salad; my husband and I had a pasta dish. I later had a salad with grilled veggies, hummus, and crispy chips and bread. The food was delicious—not like the usual baseball game fare of Nathan hot dogs, french fries, and soda. Then we were served pumpkin cheesecake with whipped cream on top. Yum! By that time I was stuffed so I took only a couple of forkfuls just to taste it. Then it was time for the game.

I saw the professional photographers (right) with their $7,000 super zoom lenses sitting on monopods. I brought my camera and couldn't wait to shoot the game. Of course my equipment paled in comparison to the pros. My son's girlfriend is studying photography so she brought her camera as well. We really had a good time. My husband enjoyed himself more than he thought he would, and my son's girlfriend was so thankful that I invited her to come.

Probably the most memorable part of the game was the mascot. OMG! He was so funny—the way he shook his butt, his belly, and got the crowd jumping and dancing. We were hysterical laughing every time he came out to entertain us. I also liked the moves of the pitchers. Ervin Santana (below left and center) from the Atlanta Braves was pretty good, although he got pretty tired midway through the game and they had to replace him. I caught a few action shots, but for the most part my photos were mediocre at best. I caught one player sliding into second base and one sliding back to first base to avoid get struck out—if that's even the correct term. All in all we had a great time! Thank you Great Valley Publishing for giving me and my family such a nice gift! I'll remember it always!!